Old Edmundians join the College and wider Edmundian community for a special Mass in Douai on the date of our foundation, 450 years ago. 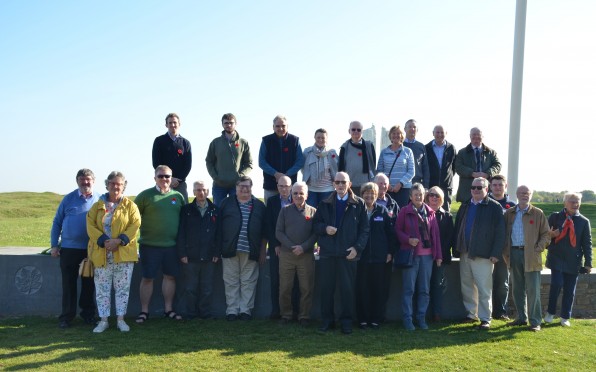 OEs at Vimy Ridge on Day 3 of the Trip
A group of enthusiastic OEs met at the College to board a Golden Boy coach for our weekend trip. We stopped to pick up a few passengers along the way and then we were off on our journey to Douai to celebrate our 450th anniversary. A slight delay at the tunnel left us only a short window to check in and freshen up at our hotel and then we were off to attend the first of the weekend’s activities, an Exhibition on Douai held at the local library. We were greeted by friendly faces from L’Association de William Allen, VIP guests and more OEs who made the trip independently. On show were a number of interesting historical artefacts and books all with a connection to Douai.

After viewing the artefacts and a quick drink we were off to our next destination, Le Vintage Restaurant, for dinner with College guests. It was a packed room with lively chat and the wined flowed. It was a great chance for people to get to know one another with connections being made easily. It was here that Michael Maslinski, OE, met Valerie Bince-Stuart, who was to lead our group on the war graves tour on Sunday. Michael shared the story of his great uncle who was buried close to Douai after falling in the Great War. With this new information, Valerie was then able to incorporate a visit to the gravesite into our itinerary for the Sunday tour, which meant a great deal to Michael.

When dinner was over we made our way to the Conservatoire in Douai to enjoy an evening of music and song. We were treated to a concert from an array of amazingly talented students all whom performed with aplomb and just the right amount of pizazz!

Saturday saw the main event of the weekend, the Mass held in the Collégiale Saint-Pierre de Douai. What a chance to worship and give thanks at the site of our foundation with the College and special guests present – a unique and moving experience for all.

From Mass we walked to the Town Hall where a drinks reception was held for guests with some celebratory fizz and a few canapés. The hall was full of local VIPs as well as College guests and it was a wonderful opportunity for everyone to come together to reflect on a superb day. Speeches were given by the Mayor of Douai and Mr Durán and the College presented the town of Douai with a beautiful mosaic of the English College by one of our art teachers, Mrs Stringer.

Saturday night saw the group have a more leisurely dinner at La Terrasse restaurant. Good food and good wine were enjoyed and convivial conversations had, even one or two about Brexit!

The third and final day of the trip, Sunday 30 September, was entitled “Following in their Footsteps”, an Old Edmundian battlefields tour. The area around Douai was subjected to intense and sustained battles between German and Allied forces.

Our local guide was Valerie Bince-Stuart, Director of the local Great War charity Le Coquelicot, accompanied by her husband Bernard. We were also accompanied by members of the William Allen Association.

We began by visiting the Dury Crucifix Cemetery in Pas de Calais which was begun by Canadian units immediately after the capture of the village, and it contained at the Armistice 72 graves. It was then enlarged by the concentration of graves from nearby battlefields and there are now 2,058 First World War casualties buried in this site, of which 1,766 are unidentified.

Here is buried Stuart Moore (1901-03), MC & Bar, who served in the 50th Battalion of the Canadian Infantry (Alberta Regiment). His Military Cross was awarded for conspicuous gallantry and devotion to duty whilst leading a bombing party with great courage and initiative. He was killed in action on 2 September 1918 aged 32.

Next we visited the Canadian National Vimy Memorial, a site dedicated to the memory of Canadian soldiers killed or presumed dead in France who have no known grave. Along the route we passed, but did not have time to stop at, the vast Cabaret-Rouge British Cemetery, the final resting place of Fr Herbert Collins (1894-1901), an OE Chaplain to the Forces.

The Vimy Memorial is the centrepiece of a 250 acre preserved battlefield park that encompasses a portion of the ground over which the Canadian Corps made their assault during the Battle of Vimy Ridge, a military engagement fought as part of the Battle of Arras. Here is commemorated John McCarthy (1911-13), who died on 10 April 1917, aged 20. John’s story is unusual in that he was born in Ireland, studied at Old Hall Green in England, emigrated to Canada, and fell serving his country just a few miles from where the College was founded in 1568. His body was never identified.

We laid wreaths alongside the memorials to these two Old Edmundians. David Kay, President Emeritus & Archivist of The Edmundian Association, read out a brief biography of each soldier and Duncan Gallie, former Housemaster of Challoner, led prayers followed by a minute’s silence.

Following this we visited the Ring of Remembrance at Notre-Dame-de-Lorette, the largest military cemetery in France located at Ablain-Saint-Nazaire near Arras. This vast ellipse is engraved with the names of nearly 600,000 soldiers, listed alphabetically and without regard for nationality, religion or rank. Here we were able to observe the names of

Joseph Mann was one of the first six Edmundian conscripts who left the College on 19 January 1916.  Only five were to return home.

During the trip we drove past dozens of Commonwealth War Graves cemeteries, as well as those dedicated to other Allied forces, distinctive by their long serried ranks of white gravestones.

The tour ended with a stop at Cuinchy Communal Cemetery where there is buried the great uncle of Michael Maslinski (1962-70), one of our group. Alwyn Gosselin was the son of Hellier Gosselin who donated a large collection of books to the College in 1924. Older OEs may still remember the Gosselin Library in Allen Hall.

The trip back to Calais and to Eurotunnel was a chance to reflect upon what had been a very thought-provoking day. There can be few places more sombre to visit than the battlefields of northern France.

The Edmundian Association has made a donation to the charity Le Coquelicot in gratitude for its work to preserve the memory of those who fell during the Great War in the region of Douai. 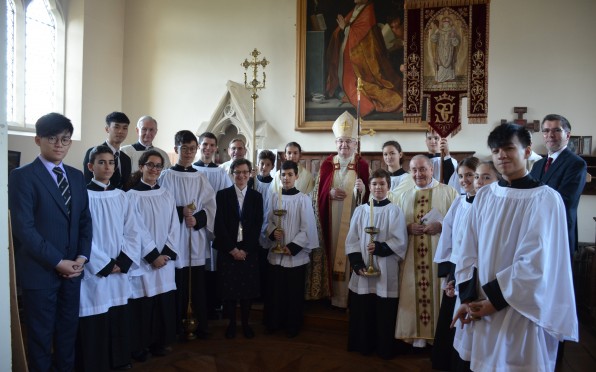 We were delighted to welcome the Archbishop of Cardiff, George Stack, OE, who was able to join us on St Edmund's Sunday and celebrate Mass. More... 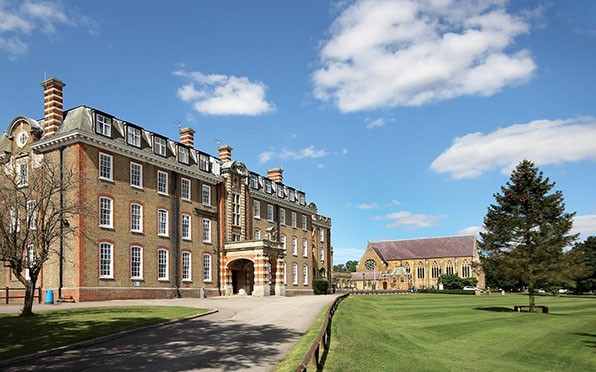 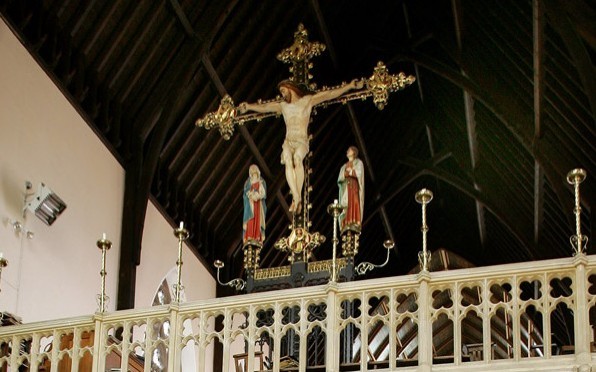 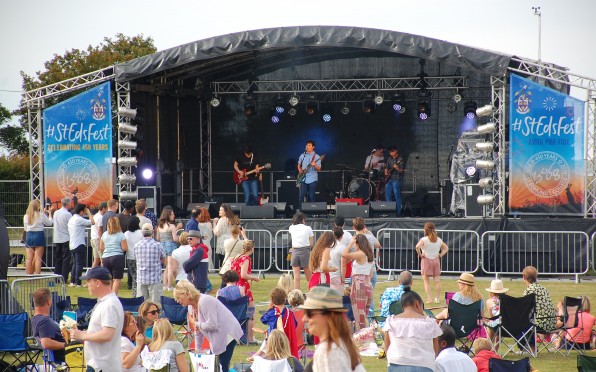 What a way to celebrate to our 450th anniversary by bringing staff, students, parents, Old Edmundians and the local comm… More... 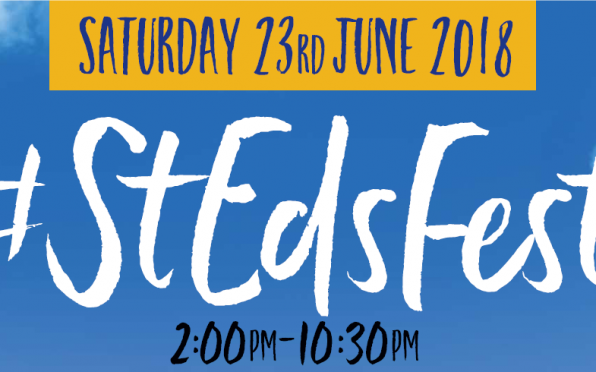 Announcing #StEdsFest! Join us for this fantastic afternoo of entertainment and fun for all the family and help celebrate our 450th anniversary in sty… More...